Long before Rudy Villarreal and Jim Foucher were business partners, the two worked alongside each other on numerous job sites. After years of experience, the spark for entrepreneurialism, and the realization that things could, indeed, be done better, the two founded RBV Contracting, Inc. on March 18, 2011.

Rudy Villarreal has had a wide range of experiences that have led him to where he is today. Growing up in Sabinas Hidalgo in the Mexican state of Nuevo León, he was a member of a successful extended family who set the example of hard work and perseverance. He attended the Universidad Autónoma de Nuevo León at the Maderas Campus in Monterey, about 60 miles from home, where for several years he studied Business Administration and Business Law.

Rudy’s father was employed in construction as a skilled tradesman and in spite of his studies, Rudy was always fascinated with building and eventually followed his father’s lead. He found employment working in various trades with a mason contractor, a steel erector, and as a field supervisor for a large mechanical contracting firm.

Fluent in multiple languages, he moved his family north in search of more opportunities and a better life. They eventually settled into the vibrant Latino community of Detroit, where he remains today. Rudy has not forgotten the values he learned from his family: honesty, integrity, and hard work. Villarreal embodies these same principles, setting the example of high standards, hard work, and a clear vision for his family, employees, and community. 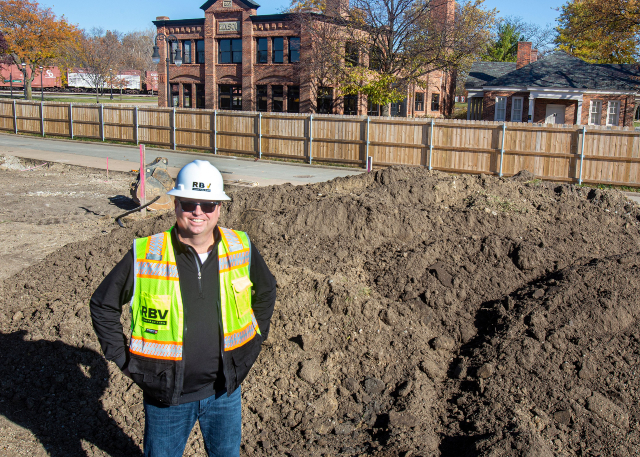 Jim Foucher is a licensed professional engineer who earned a Bachelor of Science Degree in Civil Engineering from Lawrence Technological University in 1997 and a Master of Science Degree in Engineering Management from the University of Michigan in 2002. While pursuing his undergraduate degree, he found employment in the construction field, working as a laborer, materials technician and grade checker directing small grading crews. Through his employment and studies, Jim came to exemplify Lawrence Tech’s motto, “Theory and Practice.”

After completing his graduate studies, Foucher continued his ascent through the ranks of the construction industry by virtue of his knowledge, attention to detail, and dedication to workplace safety. With his background in theory and practical experience along with a commitment to integrity, quality and safety, Jim is guiding RBV Contracting, Inc. into the next era of construction contracting.

Foucher is active in both the industry and the community, serving as Vice President of the Society of American Military Engineers (SAME) Detroit Post and as a Board Member of the Small Business Association of Michigan (SBAM). More recently, he has been appointed to the East China Township Parks Commission and is a founding member of Lawrence Technological University’s Construction Safety Research Center where he will hold a seat on the Industry Advisory Board.

“I worked directly with Jim and his staff during the duration of the project. Jim is always very professional in meeting deadlines and working odd shifts. I look forward to the opportunity to work with Jim and RBV Contracting well into the future.”

Looking for a quote on your next project? Ready to get digging? Fill out this brief form and the RBV team will get back to you within 48 hours.